EDACC A Project Edmonton Can Be Proud Of!

﻿
The Edmonton Downtown Academic and Cultural Center is slowly moving forward.
Nicknamed the "Galleria" information is slowly leaking out.
I am pleased to see that the city has approved moving ahead with this project. As a life long supporter of the Arts in Edmonton and as a graduate of the University of Alberta's School of Business, I am excited to see that the School may become part of a project that will transform downtown every bit as much as the arena will.
It is billed as a P4. A Philanthropic, not for Profit Public, Private Partnership.
Edmonton in 10 years will be unrecognizable.
Here is a starter picture of what it will affect: 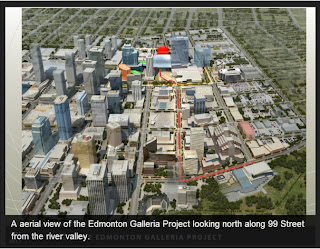 Here is a list of spaces (proposed) taken from the http://www.edacc.ca/ website.
PROJECT COMPONENTS
The proposed location of The Galleria Project is north of 104 Avenue across from City
Hall. The 1.25M+ sq. ft. project is composed of:
A. A covered but not enclosed Galleria ringed with retail, restaurant and other
commercial space that ties together project elements and provides a downtown
gathering place for cultural and civic events.
B. 650,000 sq. ft. for a University of Alberta downtown campus that includes the School of Music, Department of Art and Design and a third school.
C. 300,000+ sq. ft. of performing arts theatre/rehearsal space. Includes:
i. a 1600 seat concert hall (for Opera, Ballet, Shumka, touring companies and others needing a large facility. Includes two rehearsal spaces, and incubation and administrative space).
ii. a 650 seat theatre/concert hall (split between the U of A and arts groups)
iii. a 200 seat ‘black box’ theatre (for arts groups)
iv. a 200 seat recital hall (dedicated to the U of A)
D. 300,000+ sq. ft. for a commercial office tower.
E. Stimulation of other development:
 An estimated 1.9M sq. ft. of additional downtown development by Qualico on Station Lands.
 In-fill and activation of 99th Street as part of the Civic Precinct Plan.
 Additional residential and commercial development.
 A repurposed Chancery Hall.
http://www.edacc.ca/wp-content/uploads/2013/05/E-DACC-Galleria-Project-Business-Case-April-22-13.pdf 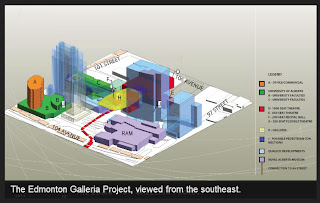 This will bring more of the University of Alberta downtown, mixing Arts, Commerce and Education.
Maybe we should nickname it ACE...

Posted by Jim Gibbon Edmonton at 12:00